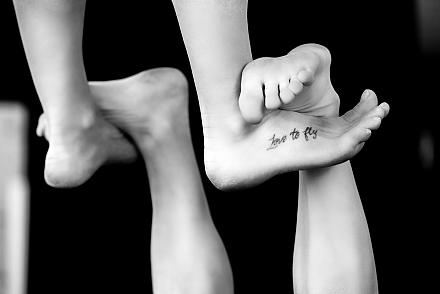 An ankle fracture (colloquially ankle fracture) is the partial or complete fracture of the fibula in the area of the ankle joint. Such an injury usually also results in soft tissue damage, which means that a broken foot can be very painful.

In this article we would like to inform you about the most important questions concerning ankle fractures:

Navigate to the individual points here:

The ankle joint fracture is one of the most common fractures

An ankle fracture is one of the most common fractures of the foot. About 85% of this type of fracture is caused by a dislocation, which is often caused by a misstep or a fall. In comparison, only about 10% of all fractures occur in the context of a traffic accident and about 4% of fractures are caused by direct force. In most cases, a simple twisting of the foot inwards or outwards is the cause.

Almost anyone can be affected by an ankle fracture - regardless of age. For those who are active in sports or competitive athletes, the increased stress per se also carries an increased risk of an ankle fracture. Twisting an ankle (twisting or supination trauma) while running, jogging or other sporting activities is one of the most common accidents in everyday life.

Possible causes of an ankle fracture can be:

What are the different types of ankle fractures?

ABC Fractures according to the Weber Classification

Ankle fractures can be divided into different medical classifications. Such a classification provides information on how severe the injury is and which surgical treatment options result from it.

Classification according to Weber

A Fracture below the syndesmosis* Syndesmosis always intact


*Injury to the ligament structure between the calf and shin bone 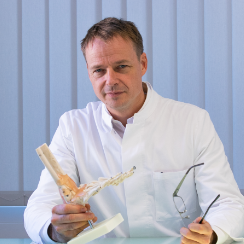 "Basically, there are different forms of ankle fractures or ankle injuries. One can quantify the severity of the fracture with so-called classifications. The Weber classification is one of them. Less common is the Lauge-Hansen classification, which is based on the position of the foot and the direction of movement at the time of the accident."

Another rather rare form of ankle fracture is the pilon tibial fracture. This is a fracture of the tibia bone that often occurs in car accidents.

Another special type of ankle fracture is the Maisonneuve fracture. In this rare dislocation fracture, the entire syndesmosis (ligament structure) from the ankle joint up to the knee is torn. The fibula is broken very high up in this fracture, often close to the knee joint. In addition, a complete tear of all the inner ligaments or the inner ankle is diagnosed. Here, too, the ankle joint is unstable and should be surgically stabilised.

"In an ankle injury, the anterior syndesmosis (ligament structure between the calf and tibia) tears first. Then the outer ankle breaks. Then the posterior syndesmosis possibly even tears off with one bone in one piece. If even more energy is then applied to the rotational fracture, the inner ankle also breaks. This is called a trimalleolar ankle fracture, i.e. the highest form of twisting trauma in the form of a Weber C-fracture."

Local pain is not an evident sign of fracture

Basically, a distinction is made between sure and uncertain symptoms of an ankle fracture. Local pain or swelling are not yet a sure sign of a fracture.

These possible concomitant injuries may occur

Soft tissues and ligaments of the foot (syndesmosis) or articular cartilage are often injured as concomitants of an ankle fracture. In addition to soft tissue damage, compartment syndrome is a common accompanying injury.

Tissue that is enclosed by a tight layer of connective tissue (fascia) is called a compartment. Classic compartments are found, for example, in various muscle groups on arms and legs. Under certain circumstances (e.g. rollover trauma), the pressure in such a compartment increases. If this pressure increase remains undetected and untreated, the affected tissue gets necrotic. The technical term for this is compartment syndrome. Compartment syndrome most often occurs as a complication after bone fractures.

What are the risks of severe ankle fractures?

An immediate risk in an accident is, for example, compartment syndrome. Severe injuries such as the pilon tibial fracture are usually associated with such a concomitant injury. In addition, ligament injuries can cause instability, which leads to cartilage wear. As a result, cartilage damage is among the other sequelae. Arthrosis can occur as a possible long-term consequence of an ankle fracture.

In the case of ankle complaints, Dr Gottlieb will first carry out a clinical and manual examination. If a fracture is suspected, X-rays of the ankle joint are taken from different directions. Often the entire lower leg is also x-rayed, because it is not uncommon for there to be several fractures or injuries. The examination methods depend on the severity of the injury. A computer tomography (CT) or magnetic resonance imaging (MRI) may be necessary. If necessary, the blood vessels are also examined with an ultrasound examination (sonography), because vessels or nerves can be affected in severe injuries.

The treatment option depends on the type of fracture 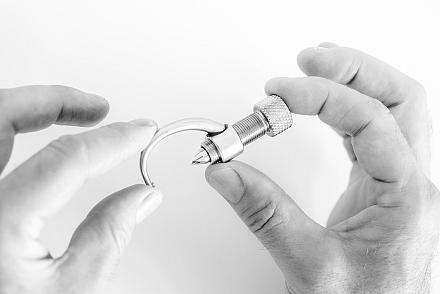 The treatment required basically depends on the type of fracture, the extent of the injury and the stability of the joint. This can vary greatly from case to case.

When does conservative therapy make sense?

Not all ankle fractures require surgery. In the case of a closed Weber A or Weber B fracture with an undisplaced fracture and without syndesmosis injury, conservative (non-surgical) treatment may also be sufficient. Conservative therapy includes immobilisation in a lower leg cast or in an orthosis (splint for relief and stabilisation) for about 6 weeks. Afterwards, the strain after an ankle fracture can be gradually increased within the framework of physiotherapy. With the help of targeted physiotherapy, it is usually possible to switch to full weight-bearing after about 4 to 6 weeks.

In these cases, the foot surgeon advises surgical treatment

In the case of unstable and displaced fractures or the desire to be able to put weight on the foot again as quickly as possible, the foot surgeon Dr Tonio Gottlieb recommends surgical treatment. In an operation, the ankle joint is brought into the correct position (reduced) and the fracture is fixed with screws and plates.

The aim of the operation is to fix the joint in a normal position as long as possible until the surgical area has completely healed. Appropriate implants (screws and plates) also protect the bones and the patient can usually put weight on the foot more quickly. In some cases, an external fixator (an external holding device used to immobilise fractures) must be used. This is often used for pilon tibial fractures because the first phase of treatment is to wait until any compartment syndrome subsides.

What is the usual healing time for an ankle fracture?

As a rule, the healing time of an ankle fracture is four to six weeks, in exceptional cases eight weeks.

In order for us to prepare optimally for your appointment with us, please fill out the contact form or
call the practice directly on+49 30 8058-1207.

We look forward to welcoming you to our practice soon.
Thank you for your enquiry. We will get back to you shortly.
Your practice Dr. med. Tonio Gottlieb. 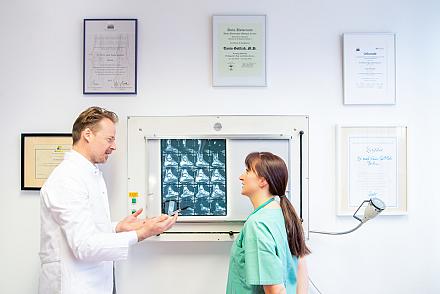 Dear patients,
Thank you very much for your trust.

We would be pleased if you recommend us to others and leave feedback on an evaluation portal.